I’m afraid that many of my readers have either misinterpreted information or have found a way to over exaggerate to an extreme. Perhaps some is my fault for deliberately showing the animated gifs of the players with the most extreme micro moves. Therefore, some of my ideas have morphed itself into exaggerations of every micro move thus turning my ideas into an awkward method. Instead of following the Goldilock’s rule of keeping to center, the students have worked too hard on their perceived errors to the point of having the fix become an error. By doing a move for an extended time, it automatically excludes other moves from being performed. Think about it, if the downswing takes .25 seconds or so, and you do a move for .10 seconds instead of .05 seconds, you’ve removed valuable time that is needed for some other move right? If there’s no time to do the next move, it isn’t going to be possible.

One example of this would be doing Snead squat and staying in dual external rotation (knees pointed outwards) for way too long. If you do that, you’ll remove the time to fire all the other moves and likely jump. Get it? 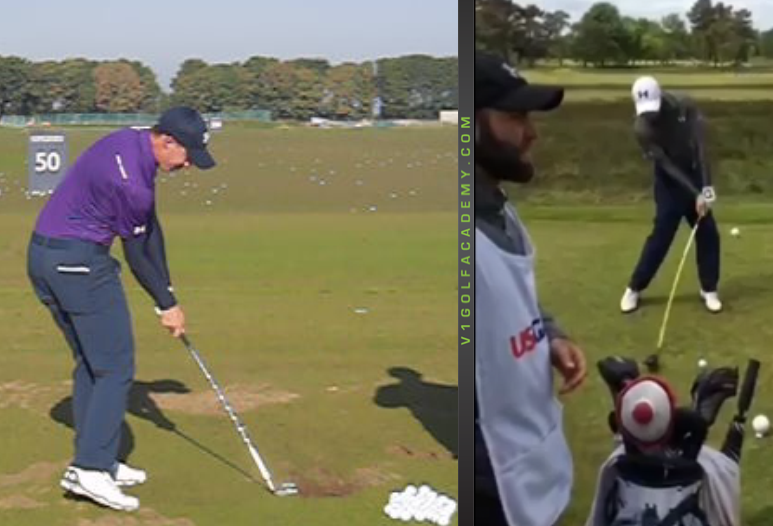 Also, I have people criticizing me for saying that I like the swing of Matthew Fitzpatrick. Well, I’m going to say that his swing or Jordan Spieth’s swing is closer to Tiger 2000 than is Jamie Sadlwoski so what are you guys going to say about that? If you want to do long drive, then you know who to copy. If you want to play good golf, you know there are some great swings on tour that have all the moves but with no exaggerations. In all likelihood they have all the movements as part of their own natural instinctive way of moving to hit a golf ball but my theory is that they were likely influenced by Tiger 2000.


Check out the swing of a young gun Miguel Tabuena. Since he’s 21 years old, he was only six years old when Tiger 2000 was dominating. One can imagine that many of the younger players’ swings on the PGA tour were influenced deeply by Tiger. And rightfully so!

Let me be clear, this is not the type of swing that I once termed “Tour Accuracy” that I talked about before where some players are restricting downswing rotation and sliding while stabilizing release pattern. Contrast to the young crop of guys on the PGA tour with a great spine driven rotational motion, drive/hold release pattern while using the elements of gravity, ground reaction force and weight shift. Tiger 2000 displayed those movements and he did everything without going overboard. So let’s keep it real. This is the man to copy as I can imagine many of the current young tour stars in their 20’s had him as their model in their formative years.

Exaggerators like huge backswings. But if you get your arms behind on the backswing, you’ll have to work twice as hard to get them back in front on the downswing.

We can see how Tiger kept his backswing wide in for about the first two-thirds. Then, he began to fold the right arm in order to keep his arm swing compact (right shoulder adduction) and in synch with his body rotation.

& Early Wrist Set can cause overswing 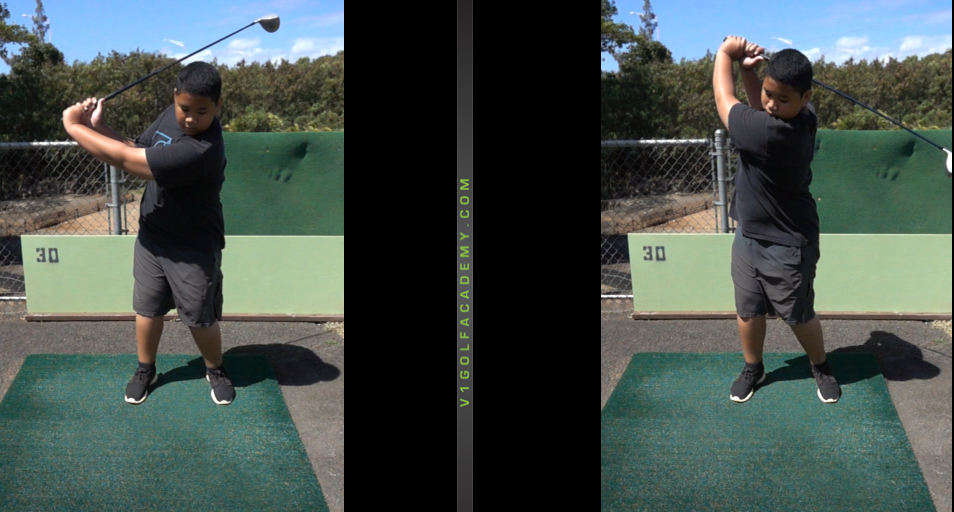 Do not perform early wrist set of Leadbetter type swing. It will only lead you to get the club too far behind without ample “shoulder turn” which will then lead to an overswing which occurs as a result of try to get “fully coiled.” So stay wide like Tiger 2000 and fold the right arm after you get 85 degree turn of shoulders.

See how a beginner can do damage to his/her own swing by trying to get a bigger backswing? One can only try to make lemonade from this lemon position? Beginner has excessive spine extension, excessive right shoulder abduction (elbow getting behind and lining up with right clavicle) and massive right shoulder ER . Contrast to Dufner who has his right arm more in front of his body (shoulder adduction) and keeps his abs tight in order to restrict excessive spine extension along with over turning the shoulders. 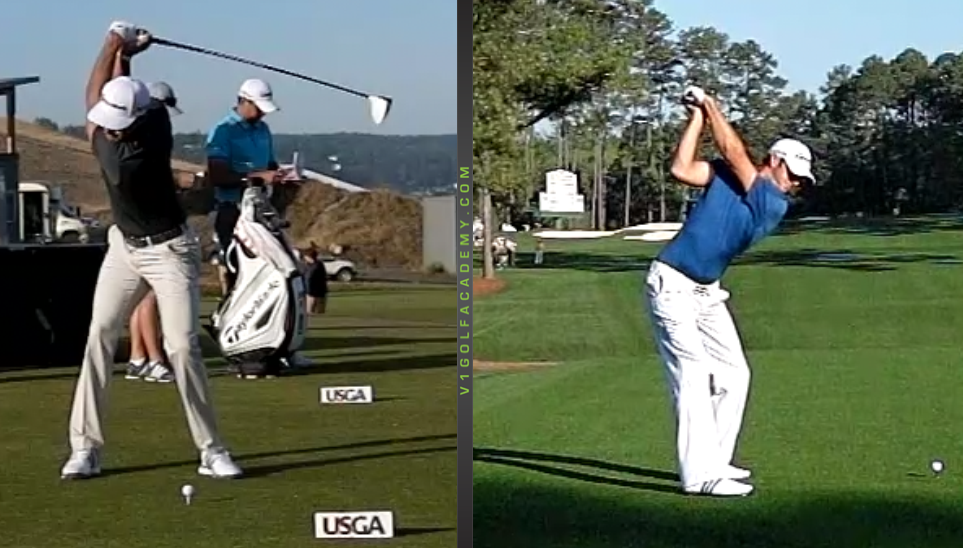 Would any of you average Joe’s care to averaging 290 yards and as accurate Jason Dufner? Sure DJ’s, Bubba’s driver backswings will get a bit longer and have more right shoulder abduction (elbow getting behind body). This could cause average Joe some problems.

What I’m really trying to say is that if you copy the big backswing DJ, you’ll likely exaggerate into an error filled swing for several reasons. Given that most golfers are not as powerful as DJ, if your right shoulder moves too far into AB on the backswing, it is doubtful that you will have the ultra-fast right elbow move (Right shoulder ER plus Right Shoulder transverse adduction) that DJ has. If in the small chance that you do have it, you’ll be fine. But if you aren’t in that lucky group, you will have created a lot of trouble for yourself and your swing.

As I have stated before, I tend to like steeper backswings. But many exaggerators have taken steep to an extreme. So if you are inclined to a flat swing like Dufner, you can do so but must be aware that you need to be even more rotational with chest/ribs in order to avoid getting stuck. See Hao Tong Li’s swing below.

Fast forward to 1:20 seconds to get start of target line video. Watch how fast the lines on front of his Nike shirt disappear. 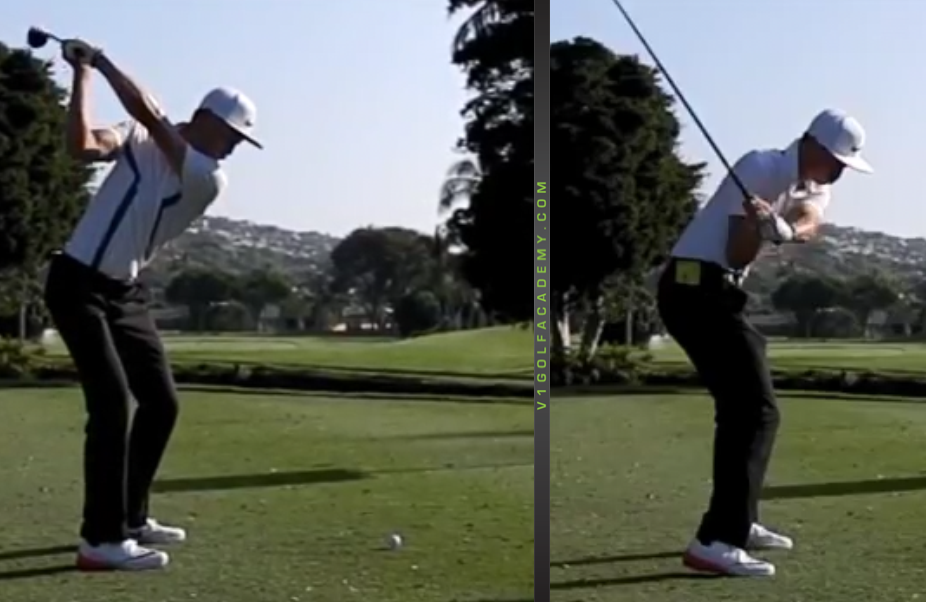 Thus from a flat, laid off position at the top, he can get the right elbow in front (transverse ADD and right shoulder ER). Said another way, he’s performing an “over” move performed with great rotation like Ben Hogan, Sam Snead, Jack Burke Jr and others but vastly different from the amateur chopper who uses right shoulder IR, ab crunching, right elbow extension and early right shoulder protraction to do their “over” move. 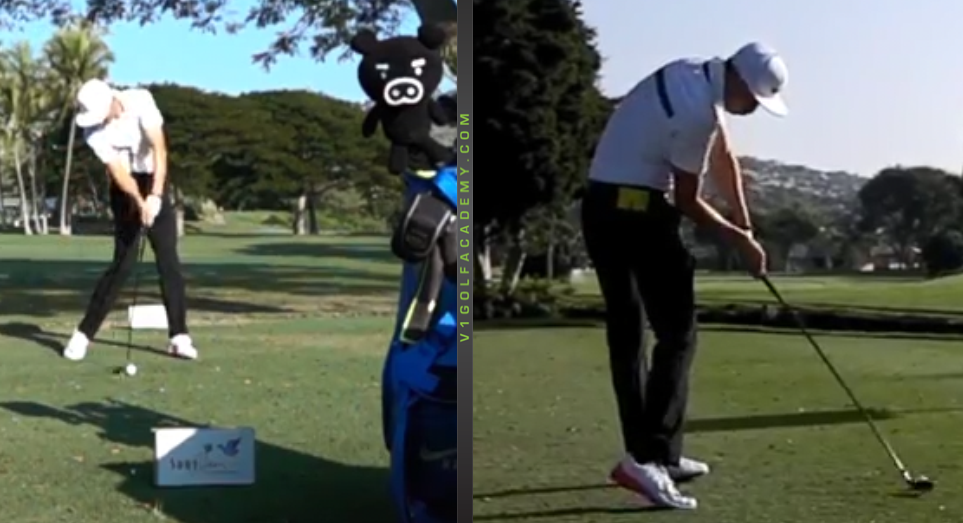 One plane Hardy followers note: This is how it is done. Not by keeping right elbow back. Utter nonsense to try to hit with right elbow staying back and stuck.

Exaggerators note: Trying to get extreme right lateral bend in transition and early downswing increases the chances of losing thoracic rotation. If so obsessed with right lateral bend, the chest rotation may not occur and will ultimately get your right elbow stuck as well. So let’s tone down the need for early RLB (RLB max at impact) and focus instead on chest or thoracic rotation.

Golfers with the early right knee kick in on the beginning of the downswing (right hip internal rotation) caused themselves a lot of trouble with early weight shift to the left and getting stalled. Thus the marching move was recommended to give their lower body a more circular movement instead of the more direct, linear move.

But exaggerators have moved their legs/hips far too much and have lost their pelvic motion. Perhaps it’s easier to do leg movements. But the pelvis is the controller. If the pelvis moves correctly, the legs/hips will find their way. Moving the legs independently will not take you to the promised land.

So here’s an alternative, you can rotate your pelvis with an immediate glute pull back with proper left hip flexion, left pelvic tilt, anterior pelvic tilt, sacrum moving away from target all while getting the left knee extension). Focus on the pelvis and legs/hips will follow.

When you focus solely on the pelvis (genius Emiliano Grillo doesn’t need to think about these moves), you can achieve great rotation while barely moving the legs/feet. This can be a very effective way to eliminate all the excessive movements from the legs. 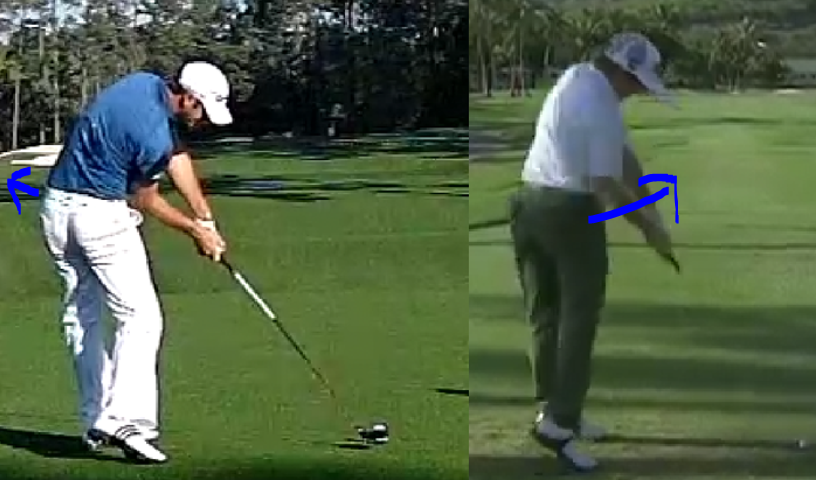 Pelvic drift is a new term I’m beginning to use to describe a slight movement of the pelvis away from the ball on the downswing (of course there is also more tailbone movement away from target as well). It is the opposite of the goat humping move where the pelvis is moving toward the ball and with both hips extending. See difference between DJ and Zac Blair?

The leg/hip/pelvic movements that make up this pelvic drift are:

Proper Trunk Rotation for the backswing does not include……….. 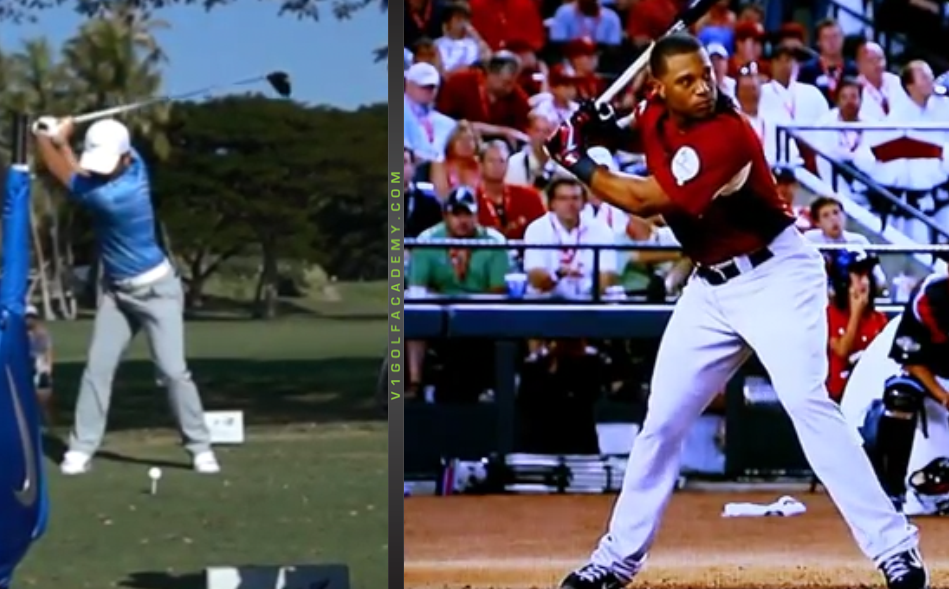 Exaggerators take the concept of thoracic spine extension and turn it into massive total spine extension (spine leaning toward target or pitcher in the baseball case). We definitely don’t want that. Seen any home run hitters with large spine extension? How about left pelvic tilt? Excessive left knee flexion?

Pelvic rotation – More on backswing or at impact?

If one were to have a 60 degree pelvic rotation on the backswing or a 60 degree rotation of the pelvis at impact, which would be better? This is a simple question that should have only one answer.

Underdone Steak – What else is underdone? 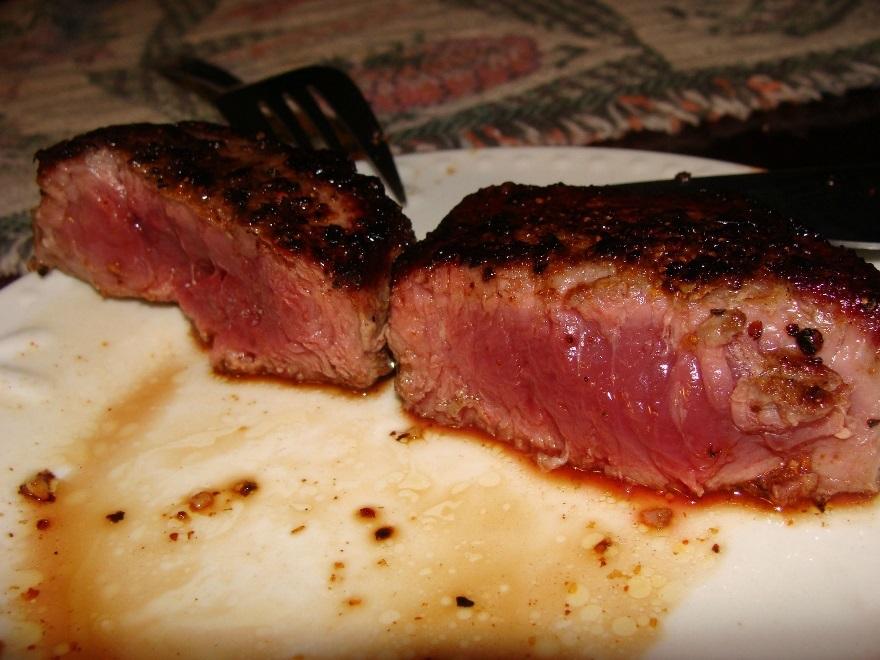 Maybe you guys can’t cook a perfect steak sous vide like the pros (Justin Tang) do. This attempt at the medium rare is a bit too raw in the middle.

Unfortunately, in amateur golf swings, I rarely see exaggerated sacrum moving away from target too much. It’s mostly underdone. I’m constantly seeing too much slide in golfers even when they’re trying not to. So people need to focus more on exaggerating the sacrum back. As soon as there is a drop onto the left foot, the ground should push the left leg/glute/sacrum away from the target and produce rotation not a continuous slide.

The other thing I’m rarely seeing is too much lag and shaft lean at impact. Sure there are some that can overdo it but it is a far easier fix than to continue to struggle with a flip/roll for the rest of your golfing career. So virtually everyone is making swings using their hands/arms to hit the ball rather than hold lag and use fascial elastic right shoulder internal rotation whipping.

Example of an Exterme Exxagerator / Goldilocks Rule
Cody Nizzardo - Great swing... great hardworker. He gets some nice swing sous vide in the end there...

It is a given that the human condition is such that we are not as objective as we would like to be when critiquing one’s own swing, it would be helpful to consider using apps that allow a split screen comparison like v1 home premium or other software. Any movement can be overdone. Remember the Goldilock’s rule of thumb and if your swing isn’t looking closer to a good tour pro swing, it isn’t going to work like one. Thus fixing all these over-exaggerations can be very helpful in the pursuit of a great golf swing and better ball striking.